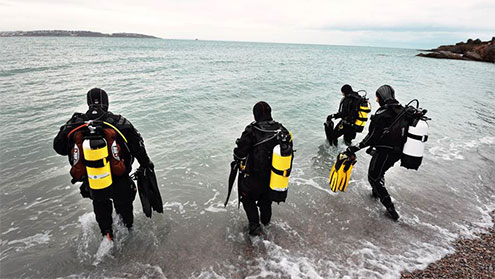 When most people mention reefs, they usually mean coral reefs, without realising that reefs can be extensive in temperate (cooler) waters. There are fundamental differences in the structure and dynamics of tropical and temperate reefs.

Temperate water reefs consist of a rocky substrate, which is colonised by a range of algae, attached invertebrates, and kelp forests — highly productive, structurally complex communities of large brown seaweeds. Coral reefs are built up by small animals that secrete a calcium carbonate skeleton (corals). Temperate waters are cooler and nutrient levels tend to be higher compared to reefs in tropical waters.

Many of the reef dives in Bass Strait near Melbourne are actually dives on the Great Southern Reef. Yes, that's Australia's less well known reef even though its kelp forests contain more unique and diverse marine life by global standards, and it covers 71,000 square km. 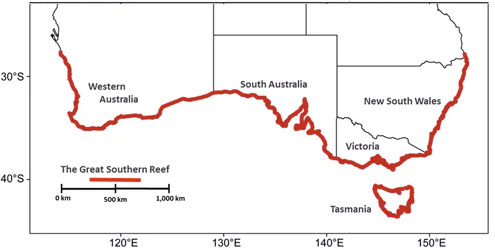 The Unique Flora and Fauna of Victoria's Marine Environment

Consider these facts: 85% of the temperate fish species, 95% of the species of molluscs, and 90% of the species of sea stars or sea urchins (echinoderms) are unique to temperate Australia. Huge ranges of sea squirts (ascidians) are also found, with 189 species recorded. Many of these species are Great Southern Reef dwellers at some stage of their life cycle.

As a comparison in the tropics, where many species tend to disperse more widely, only 13% of fish species, 10% of molluscs and 13% of echinoderms are unique to the region.

In Southern waters 1,100 species of red algae described so far represent 25% of the world's total, with 75% of them being unique to our region.

Many ships have come to grief in Victoria waters, plus there is an extensive Ships' Graveyard in Bass Strait, not far from the entrance to Port Phillip and the Port of Melbourne. These wrecks have all become exciting artificial reefs and home to thousands of marine creatures. More about: Melbourne Wreck Dives - Shipwrecks of warships, submarines, sailing clippers and more...

The following Melbourne Reef Dives are a good mixture of shore and boat access diving. Some of the shore access reef dive sites can also be accessed by boat, but the reverse is seldom true.